You are here: Home / H2 Renewables

While the United States has an abundance of wind energy resources, getting this power transmitted to large geographical ‘load centers’ (cities) is difficult due to the lack of costly transmission lines. One answer to that problem is to bring the large electricity users to the wind resource instead. This allows otherwise ‘stranded’ low cost electricity to be used to create other products, such as Hydrogen or hydro-chemicals, at new factories located near the wind farms.

H2 Renewables, LLC is a company focused on making this happen at several wind farm sites in the USA. AED is pleased to be working with Mr. Robert Chew, our Joint Venture partner, on this exciting endeavor. H2 Renewables is currently working with a major US renewable project developer and several chemical company ‘off takers’ to develop 6 such sites.

The electricity created will be used to drive electrolyzers, which produce the Hydrogen. This element can be used in the rapidly growing alternative fuel markets for new cars and trucks, or can be used in the production of chemicals such as Hydrogen Peroxide, or Ammonia (NH3). 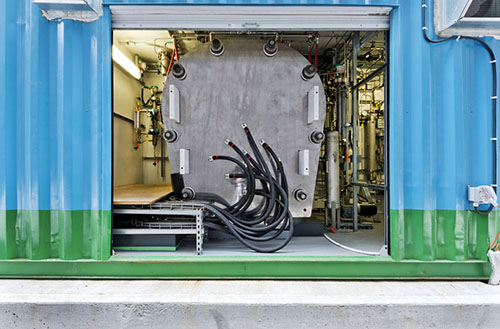